Costa Rica is a small Central American country of 19,730 square miles (51,100 sq kilometers), about the combined size of New Hampshire, New Jersey and Rhode Island. It is bordered by the Pacific Ocean on the West and the Caribbean on the East; Nicaragua to the North, and Panamá to the South. Crossing from one coast to the other takes about six/seven hours by land; traveling overland from the northern to southern border takes about 10-11 hours on the Interamerican Highway.

The more than one million tourists who visit Costa Rica each year do so for good reason. Costa Rica is a fantastically gorgeous country which offers beautiful beaches; the majestic, active Arenal volcano; lush, exotic, fantasy-green rain and cloud forests (amid which this development is situated), and a seemingly never-ending range of tropical animal and plant life.

Along with its unparalleled and impressive scenic beauty reinforced by a consolidated system of protected wildlife areas, Costa Rica offers the potential investor/resident social and political stability, excellent schools at all levels, and an expanding, modern communications, transportation and services infrastructure.

Costa Rica's strategic position in the heart of the Western Hemisphere, its government's positive attitude to foreign investment, its infrastructure, access to international markets, and the quality and relatively low cost of labor, make Costa Rica an ideal place both to live and to do business. 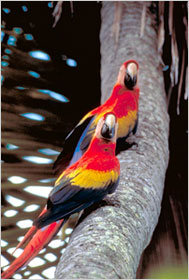 Entry Requirements - With a valid passport and a round-trip or continuing ticket, citizens of the United States, Canada, Germany, 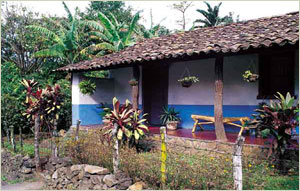 Spain, Italy, etc. can travel to Costa Rica for a 90-day stay without a visa. Visitors who might want to extend their visits to Costa Rica beyond these limits should go to the Immigration Office when they arrive here. There are also several classes of permanent residency available. A Costa Rican embassy/consulate in your country or a competent Costa Rican attorney can inform you of the terms and requirements.

Political Stability - Costa Ricans are very proud of their democracy - one of the oldest in Latin America - and peaceful history. Through its constitution, the country abolished its army in 1948 and invested the resources previously committed to military defense in conservation, education and public health. Several political parties exist in Costa Rica and over 80 percent of the citizens participate in the political process. For years Costa Rica has basically had a two-party system, and one party usually has replaced the other in power following general and presidential elections. The transitions are peaceful. 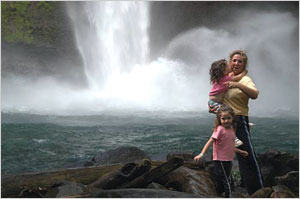 The People - Costa Ricans, or "Ticos," are happy, friendly and gracious people. Their common greeting is "Pura Vida!" There is little abject poverty and a thriving but slowly declining middle class. The 96 percent literacy rate is the highest in Latin America. Primary education (1-6 grade) is free and compulsory for all. Costa Rica's health care system, modeled after the Canadian system, includes both public and private care providers. Life expectancy is the same as in the U.S. - 77 years.

Natural Diversity and Beauty - Costa Rica comprises only 0.01 percent of the earth's landmass (less than 20,000 square miles), yet is home to five percent of the planet's animal and plant species. There are more species of plants and animals per acre in Costa Rica than anywhere in the world. Biodiversity is evident everywhere: 10,000 species of plants, 850 species of birds, 800 species of butterflies, 500 species of mammals, reptiles and amphibians. You don't have to go far to experience a different and unique ecosystem: mountains over 12,000 feet above sea level; active volcanoes; cloud and rain forests; waterfalls and tropical jungles; banana, sugar, pineapple, coffee and papaya plantations; mangrove forests and coastal swamps; and beaches and marine environments that support a variety of water fowl, fish and crustaceans. Approximately 30 percent of Costa Rica is protected through national parks, biological and archeological reserves, and wildlife refuges.

Accessibility – Costa Rica is no more than a day's journey from anywhere in continental North America. San José, Costa Rica is only two and a half hours from Miami. More than 20 direct flights come in daily to San José and to Liberia in the north of the country from U.S. and Canadian cities, including Dallas, Houston, Atlanta, New York and Toronto. The time in Costa Rica varies by no more than two hours from any U.S. or Canadian location.